Capturing the qualities of an extraordinary place. 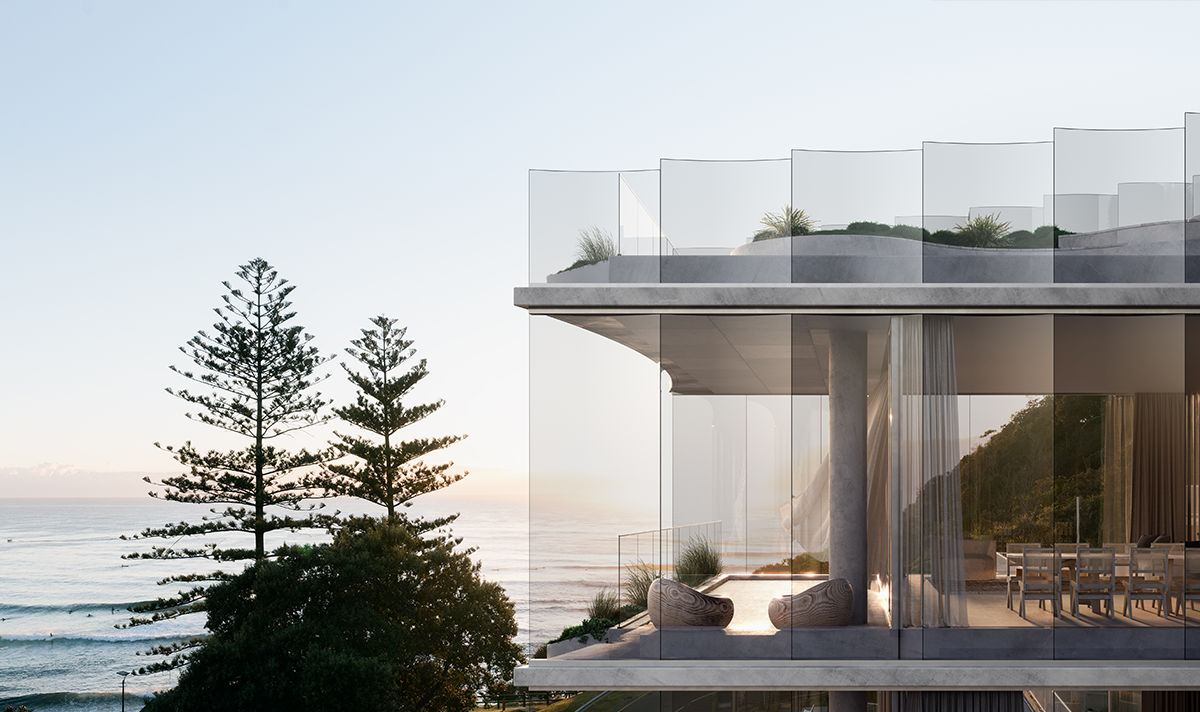 How is the character and spirit of Burleigh Heads captured in the architecture of Glasshouse?

Suspended between an ancient, rugged headland and endless, glassy ocean, Glasshouse is an abstraction of the natural landscape. Drawing parallels to the topography of Burleigh Headland, the building form steps in unison with the topography. The architectural envelope echoes the ephemeral quality of the ocean with a rippling surface of fluted glass. The three hyper-luxury apartments are designed to frame the panorama of rolling sands and the Coral Sea that stretches north from this place of unrivalled aspect and outlook.

The architecture embodies the qualities of the Burleigh Headland, its natural, permanent forms, revealed in the solid and planted elements of the façade, balconies, and rooftop. Fissures are made in the façade to allow the landscape to take seed in small planter beds on the eastern, western, and southern facades and northern balconies. This strategy echoes the organic way coastal landscapes find root on rocky outcrops. The layering of the landscape over the architecture is a deliberate strategy aimed at bringing a seasonal quality to the building and further embedding it in a thriving coastal landscape.

How does the interior realm strengthen a coastal experience?

The interior realm is designed with a commitment to drawing visual and spatial connections to the coastal landscape. The spatial experience reveals as a trilogy of realms that move from open toward the beachfront, invited at the centre of the plan and private where retreat spaces nestle at the foothills of Burleigh Heads. As the sequence of rooms moves further from the shoreline, the interior transitions from dissolved and open, to spaces gradually becoming more sheltered and introverted.

Just as the architectural form and envelope are conceived from nature, bespoke interior elements adopt organic forms and are hewn from natural stone. Micro-gardens are integrated to further draw landscape elements inside. The effect is that in every room, there is a sense of being grounded by nature. Elements of landscape, breeze, sunlight, and atmosphere heighten the connection between the ceremonies of daily life and the qualities of living on the coast.