Supercharging Queensland through the 2032 Olympics.

With Brisbane set to host the 2032 Olympic Games, how can Queensland capitalise on the opportunity and use the Games as a springboard for the future? Liam Proberts says it starts with creative ambition.

“The 2032 Olympics must be a supercharger for Brisbane and Southeast Queensland.” So says Liam Proberts, founder of award-winning Brisbane architectural practice bureau^proberts.

Liam is laying down a challenge. As a member of the Committee for Brisbane’s Olympics and Paralympics Legacy Taskforce, he believes that realising the potential of the Olympics, beyond the event itself, starts with creative ambition. “The Olympics will bring legislation that opens doors for developments and initiatives that might not otherwise happen. It’s a chance to fast-track ideas and deliver cultural, social and economic benefits for decades to come.”

The Games is also a chance to build Queensland’s identity. “This is a once-in-a-generation opportunity to hold up a mirror up to ourselves and reflect on who we are and what’s important to us,” says Liam.

Liam is emphatic that design, art and architecture must be firmly embedded in visioning from day one.

“Our games must be distinctly Queensland, a celebration of our climate, natural environment and Indigenous and European heritage,” says Liam. “If we look to other Olympic cities, we can see how they’ve used design to amplify their identity, internally and externally.”

He cites Barcelona’s 1992 Olympic diving pool, which boasted a spectacular view across the city and the iconic Sagrada Familia to the mountains beyond. The view became etched in the collective memory of visitors and tv viewers from around the world. Thirty years on, the pool is a well-loved community asset still enjoyed by Barcelona’s residents.

The legacy of the Games is central to the IOC’s criteria when selecting a host city. However, Liam is quick to point out that legacy extends well beyond infrastructure.

“We’ve already made some great moves. The Howard Smith Wharves, Fish Lane and the South Brisbane area have broadened Brisbane’s social and dining offering. More importantly, we’ve seen galleries and other start-up businesses co-locate in those areas. We need to ensure those organic, grassroots connections filter down.”

Liam is clear about how creative partnerships can build capacity, community and culture. A key component is shared experience. “Architecture and art in the public realm create inquiry,” says Liam. “Like a good book or movie, they distil thinking into an expression that feels right. That’s what we do with buildings – create place and connection.”

A vivid example is bureau^proberts design for the Australia Pavilion at Expo 2020 in Dubai [image below]. Playfully conveying meaning through form, the Pavilion uses a cumulus cloud made from aluminium blades as a metaphor for national and shared identity.

“We wanted to capture the Australian qualities of openness and invitation. Everyone is equal on the beach,” says Liam. “Cumulus clouds are seen everywhere in our country and are also visible in skies around the world.”  Beneath the Pavilion’s cloud sits a central, open space for gathering, performance, dining and rest.

“With the Olympics, we have an unrivalled opportunity to support our creative sector and engage deeply with our own people and place,” concludes Liam, issuing a clear directive. “As we plan the Brisbane Games, our creative practitioners must be sitting squarely at the table, not on the sidelines.”

This article was also published on Architecture&Design on 2 August 2021. 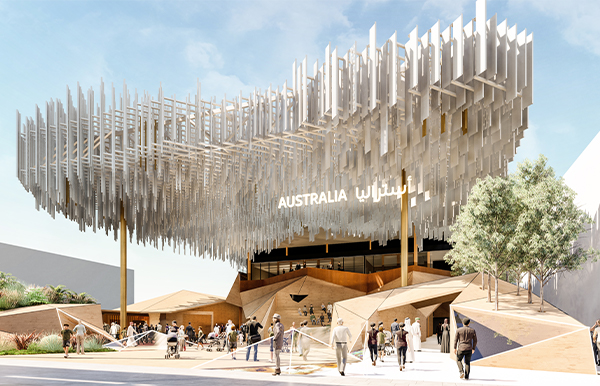